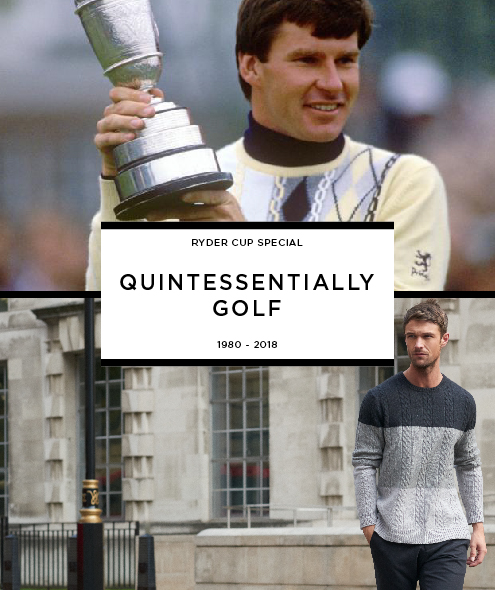 As sponsorship became a norm in modern golf, golfers ditched the plain garments and stepped into designer clothing. No one embodied this change more than Greg Norman, who left his mark with big hats, bold colours, and his own “Shark” clothing line.

The Pringle sweater was synonymous with eighties golf. Sir Nick Faldo famously sported a Pringle garment when winning the Claret Jug in 1987 (pictured), but the knitwear was also a popular choice of the likes of Terry Wogan and Ronnie Corbett. As the popularity of golf grew through the 1990s, golf pros often wore more logos as they gained sponsorship.

Golfers colourful clothing was dictated by brand standards and emblazoned logos. Golfers were toning down their use of bright colours and instead stuck to darker shades. This was due to well-respected clothing labels such as Nike, Adidas and Calloway taking precedence in the golfing market. The quirky edge that had somewhat defined a decade of fashion was disintegrating as blacks, greys and white were popular on the course.

Matching shades of grey is arguably the most important aspect to consider when sporting the grey look. Instead of creating outfits composed of a single block shade of grey, mens fashion is getting increasingly creative, coupling up darker and lighter shades to great effect.

The Vail cashmere crew neck is the ultimate piece to add into your autumn wardrobe. In three shades of seasonal grey, from dark charcoal to light heather grey, this luxury garment is lightweight, soft and a comfortable fit. Get FREE DELIVERY on this garment and all AW18 products by using code AW18COMP at checkout.

No products in the cart.