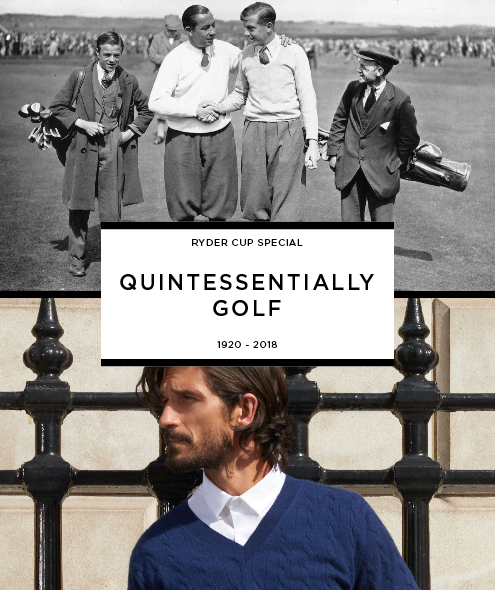 Much like the game itself, men’s fashion in golf has certainly evolved in the past century. With the start of the 2018 Ryder Cup just 4 days away, we look at the ever-changing fashion of mens golf. Prepare yourself for bulky tweeds, fluorescent trousers and everything in-between.

According to a Vanity Fair advertisement in 1918, the well-dressed golfer would wear a single-breasted tweed jacket with a waist coat and “knickers” (similar to the English knee breeches often worn in court dress). Bulky tweeds provided a warm, thorn-proof shield against the elements, but were hardly conducive to a powerful shoulder turn. Cotton long “puttees” or stockings, a golf cap and golf shoes completed the outfit.

However, social conventions quickly began to change as golfers deserted the heavy tweed jacket. Instead, on cool crisp mornings, golfers would wear knitted cardigans and V-neck sweaters. This was largely due to Edward, Prince of Wales, who influenced golf fashion with his dapper personal style, especially in his choice of traditional Fair Isle patterned knit pullover sweaters and argyle socks. By the 1930s, golfers abandoned their knickers in favour of flannel trousers, and the colossal tweed jackets were replaced by V-neck sweaters, which allowed for an easier swing.

Wearing a v neck sweater with a dress shirt underneath will add an extra touch of class to your look. The important thing to consider when wearing a dress shirt under a V-neck is to make sure the shirt and sweater go well together, and that the colour coordination corresponds.

The Boulder cashmere V neck is an adaptable, luxury autumn garment. In a smart, cable knit denim blue, this garment is perfect under an unstructured blazer or over a white shirt for the office.

No products in the cart.